The latest group of International Student Volunteers (ISV) volunteers joined VA32 in Chintsa from 24th June - 5th July and were the fourth group of volunteers taking part in several community development initiatives this winter season. This group saw the start of a major project based in local township school Silatsha which will be undertaken and completed over the next 12 months. 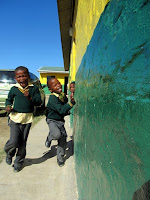 Silatsha school is situated around 50kms from Chintsa and receive support from VA32 volunteers as often as possible, through building and maintenance of the school facilities, sports initiatives and computer literacy classes when possible.

Silatsha currently has five small classrooms in which to teach 8 classes of children from Grade R - 7. In 2010-11 VA32 worked with ISV volunteers to build their fifth classroom and 2013 marks the start of a sixth classroom.

Volunteers undertook one of the most challenging phases of work to prepare the area and ground for building to commence. Work completed includes:

- Digging foundations (which was an extremely long and difficult job on REALLY hard ground!)
- Removing rubble and rocks from the ground

- Mixing and throwing the concrete for the foundations

As well as beginning this large project, volunteers also did some basic maintenance on the existing facilities which was much needed. These tasks included:

We received a great reaction from members of the community in Silatsha village which was a real highlight to working there; local fathers of current or past kids of the school volunteered their building skills to help with the work and they were happy to just share their experiences and to work with no pay, just to be involved. Group four was also extremely hard working, motivated, enthusiastic and fun to work with. They left Chintsa on 5th July to explore Southern Africa on a well deserved adventure tour.

The new Silatsha classroom with be developed further this winter with two additional groups of volunteers working on the project. Completion is estimated for Summer 2014 when the classroom will open its doors to young learners of the village.

A huge thank you goes out to an awesome group of volunteers, to Silatsha school children and teachers for being so welcoming, to Silatsha community for their enthusiasm and help and to ISV for continuing to send enthusiastic volunteers to our community development projects.