Our latest group of International Student Volunteers (ISV) spent time in Chintsa with VA32 from 20th July - 2nd August. This group were here to work on our current Community Development Initiatives which involves the continuation of the classroom building project (first mentioned in the original post "Volunteers Build New Classroom in Rural School") at Silatsha School on the Wild Coast.

The group worked with project leaders Denver and Milton who had the help of ISV co-ordinator Katie, and achieved huge success in pushing the building work forward at a seriously speedy rate!

Before the group arrived the building had foundations dug and was built with blocks up to two levels. This group completed the following tasks:

Once this huge task was completed the volunteers then moved on to the next mission - building up the walls! The managed to: 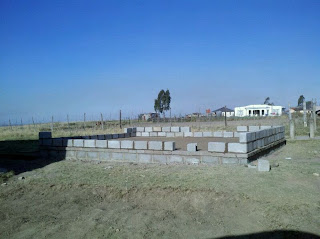 This group really achieved great strides in the building project and worked extremely hard. One of the highlights of the work was a challenge between co-ordinator Katie and the volunteers to see who could mix the most wheelbarrows of cement in one day! That day a total of 150 barrows of cement was mixed! Amazing!

A massive thank you to an awesome group of vollies who are now enjoying some of the highlights of Southern Africa on their adventure tour, to co-ordinator Katie for sharing photos and insights into the project and to all VA32 staff and community members who have been involved in the building so far! Can't wait to see the next phase!