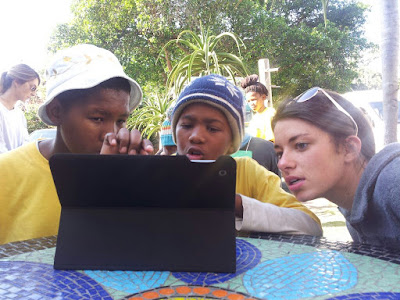 17 participants. 13 Texas Student University (TSU) teaching volunteers. Five days. A whole host of multi-media technology to get to grips with.

Now, five days may not seem a lot, but do not underestimate the powers of  TSU volunteers and their professor Lori Assaf. Following the success of Geek Club 2014 and prior to the arrival of the group, Lori and I discussed how to not only match but also extend and ignite passion in the abilities of our talented young geek clubbers. We wanted to engage not only the young people of Chintsa, but also get them thinking about their own community and how they interact with it. Last year, saw the same participants research their dream careers, along the way they met and interviewed guest local speakers about different careers - from Dr Madeleine Muller to our very own Thobs the tour guide. We ended up with some fantastic presentations.

Getting to know you

Monday morning brought eager and early geek clubbers! We kicked off the week with a morning dedicated to getting to know each other. We split off into groups, with each group having a dedicated geek club mentor and two TSU volunteer teachers. "Me, myself and I" was the name of the game - each person introduced themselves and spoke about an artefact that they owned, whether it was a necklace or a picture of their family. This was a great way for students to start making connections with each other and as a group.

The next part of the morning saw the discussion move towards Chintsa. We had a series of artefacts to study which fell under the different categories that we were going to focus on during the week; sports in the community, politics/governing body, Xhosa traditions & customs in the community and education in the community. We investigated the origins of the artefacts through discussions and practised interviewing techniques. From an old sports trophy to an article about Xhosa circumcision rites featuring our very own Sandile. The aim was to find out more about the geek clubber’s community of Chintsa. In their groups students begin to draw elaborate, and detailed maps. They labelled important places to them - whether it was the soup kitchen, their home or Nthukthukweni crèche. This exercise triggered fantastic conversations surrounding their thoughts about the community. “Why are there so many churches in Chintsa?” “What is happening to our local school?” “Why is the sports fields not fixed yet?”


Next stop was sandwiches and games! “There’s a fire in the mountain, run, run!” This was a sure fire hit with everyone, pitching in having fun together. Before we knew it was time for our first guest speaker of the week. Naidoo came and spoke to us about sports in the community. It was interesting to learn about not only the history of sports in the local area but also the history and development of their sports trophies which once began life as recycled and painted plastic bottles and are now snazzy engraved trophies.


We started the day off with a bang by learning a new song Shabooya! It is a rap which always begins with the rhyme “"shabooya sha sha shabooya roll call". Temie (from Temie’s soup kitchen), heard our roll call and suggested that we change it to something else -  Siyavuya - which means "we are happy". I couldn't think of anything more apt. The aim of the game is to learn more about each other, and try to rhyme which is the perfect recipe of an ice breaker... An example of one of my rhymes was “My name is Charlotte, I live in Chintsa, I try to surf, have you ever been here?”

After our new fun roll call we went back to our groups where the work continued filling out the community maps of Chintsa. The attention to detail from students was impressive and it was interesting to see how some maps focused on different parts of the village depending on whereabouts they lived but also on their interests. 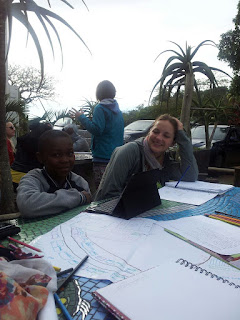 The rest of the morning was spent beginning the geek clubber’s projects. With the help of our TSU volunteer students, the learners began to consider which part of the community they wanted to research and present. They had the freedom to choose any aspect or issue within the community which interested them in addition to choosing any technological medium they wished to focus their project on, whether it was creating a movie, song, book or Powerpoint Presentation...the list is endless! The TSU volunteers helped learners to decide on their projects by asking questions and utilising technology resources which got the students thinking about issues surrounding their project. Questions asked included “What do you already know?” “What do you WANT to learn?” “Describe your plan for collecting information on this topic”.

It was really exciting to see multi-technology devices being used by the kids. We were lucky enough to have 10 ipads which TSU brought along for their stay, and the speed with which our students picked up how to use them was fantastic. Okuhle began experimenting with filming, Patrick was busy recording a song, whilst Yanga and Awonke decided to start researching Chintsa on google maps.

Before we knew it, it was time for our daily dose of sandwiches and games - today's game was SPLAT! This proved to be a massive hit, no-one ever tired of playing it.

Our second guest speaker of the week was Mjozela, who came to talk to us about the history of crime and crime prevention in Chintsa. The geek clubbers were curious to find out about tackling crime rates and how Simon begun his security business in the village.

Today’s geek club started with the TSU volunteers meeting the geek clubbers in their own community. Each group had already planned and decided which part of the village they wished to visit and why. This was a fantastic research opportunity for the students to document their area of interest. Nezizwa’s group visited the playing fields to document its progress, her research question was surrounding the future of the local sports field. Whilst Tito’s group investigated the local bus stop. Due to the drugs and crime moving into his area, Tito was unhappy where he was and was looking for an alternative. Meanwhile, Sandile engaged a local church leader and asked him questions about the amount of churches in Chintsa. His research focused on why Chintsa has 10 churches, and yet there is only one god?


After a successful morning, each group made its way back to camp armed with photographs, videos and interview notes. Geek Clubbers eagerly began documenting their project in their own ways. It was inspiring to watch Yamkela’s group filming their own news channel based on what they believed to be the biggest issues in Chintsa. I learnt many new things about area 17 that I did not know about before, and I was impressed with Yamkela’s articulation of its issues.


Armed with our sandwiches we had another fun break! Which of course would not have been complete without a few games of SPLAT! There was no room for any other game.

Today it was the turn of the subject Xhosa traditions and customs. The brilliant Phumla Pakamile took us on the story of male circumcision. Long time friend of VA32, Richard Bullock’s was recently invited to document the circumcision rite shadowing some of the young men in the village - you can read more in his article "It's Hard to Be A Man". 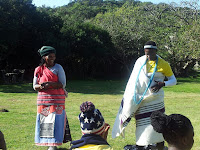 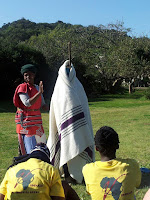 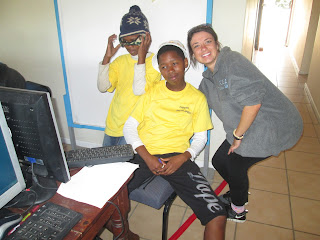 Laughter, music and jokes. Watching each group beaver away at its own project, made me realise the strong relationships which TSU volunteers and geek clubbers had established over such a short period of time… and we only had one day left! Okuhle and Lindsay spent time today editing their imovie about Chintsa East Health Outpost. Initially quiet and shy, Okuhle’s confidence blossomed with his passion for acting! Lindsay and Okuhle filmed scenes which involved a young boy being ill and treated by a nurse at the outpost. I was asked to feature in the film as nurse, which proved to be a lot of fun! Okuhle is a very convincing ill person.

After a long morning, we managed to squeeze two guest speakers into one slot. Sandy came and talked to us about SANCO (South African National Civic Organisation) in Chintsa. It was insightful to hear how SANCO was established, and hear how there are a lot of logistics behind decision making. Next to step up was Phuma who spoke to us about the history of education in Chintsa. From its humble beginnings of one large classroom, one teacher and 7 grades, to an established school with several classrooms and teachers. (Though of course, this in itself is not without challenges, with students dealing with teacher absenteeism, lack of resources and several grades sharing one classroom on a daily basis).

This morning saw the end to five fantastic days of research, technology and a lot of hard work. The TSU volunteer house was transformed into a viewing area with plenty of chairs and sofas ready to accommodate our big bustling group of Geek Club 2015. There was an air of both excitement and trepidation as we settled down to watch everybody’s projects. Despite having an initial shyness about their work being shown, there was a quiet pride which each young person had. And so they should! This was supported with warm praise by the rest of the geek club. What was exciting to see was the emergence of Chintsa ambassadors, real positive role models for the young community of Chintsa, not afraid to discuss issues which they felt passionate about. Whether it was the unfinished sports field, the issues of area 17 or want of a better education at Chintsa East School.

You can see some of the work complete by the Geek Clubbers on a website about the project set up by Lori.

The morning was a special moment for the project, though bittersweet as it meant the end of a journey for our TSU volunteers and Geek Clubbers. But in many ways it was also the start of friendships, with calls of “see ya at sports”, “catch you at surf school!” as they made their way home after the presentations.


“I learned that courage was not the absence of fear, but the triumph over it. The brave man is not he who does not feel afraid, but he who conquers that fear.” Nelson Mandela

A big thank you to Lori and the amazing TSU teaching volunteers for recording and sharing the projects completed by the club, as well as their images and experiences on the website above. 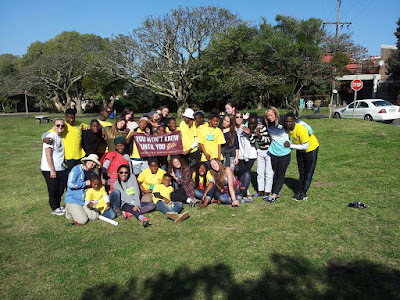 VA32 is excited to see what the collaboration with Texas State University brings in 2017.

Find out more about volunteering on the Wild Coast Schools Project, teaching computer literacy, technology and multi-media skills to young learners in rural South Africa.
Posted by Volunteer Africa Blog at 11:47 am