Conservation Volunteers get up Close and Personal with a Rhino

It's been an incredible week for our conservation volunteer Marco who's been with VA32 for the last month - not only did the conservation team re-locate two buffalos but they also darted a fully grown Rhino!

All went to plan with the buffalo capture and release - the animals were kept in a holding area, darted to send them to sleep and then lifted to a truck and taken to their new home - a game reserve in the Eastern Cape.
The grumpy rhino was quite a challenge! One of his hind legs was caught in a snare around a month ago and has been festering and bleeding causing serious pain. The team darted the rhino in the bum! Once they were sure he was down they crept up on him to cover his eyes and had to move his enormous body to reach the foot which needed treament. The foot (once freed from under the weight of his body) was cleaned and treated to return the huge beast to his normal healthy self. 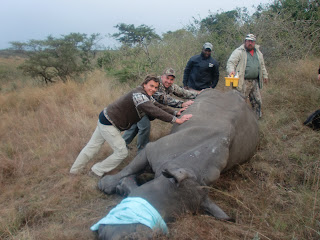 Thanks for the pictures Marco - what a fantastic experience!