The Challenges of Volunteering in Rural South African Schools

VA32 are lucky enough to partner with Texas State University who bring a group of teaching volunteers to Chintsa annually to support the Wild Coast Schools Project. The students volunteer in various rural schools including Bulugha School which is on the outskirts of Chintsa and gets consistent support from volunteers in their permanent computer lab, and Chefani School which receives intermittent support when volunteer numbers allow.

Volunteer teacher Emily took the time to share her experiences and the challenges that she faced while teaching at Chefani School. This is the first in a series of blogs and movies shared by the Texas State volunteer teachers:

Working in Chefani (a rural school on the Wild Coast of South Africa) was such a meaningful experience! In the beginning, it was quite apparent that the learners here were not too familiar with working with volunteers. This made the first few days quite difficult. I felt that a majority of the children were apprehensive of us being there and teaching them something new, which made it difficult to establish a connection with them. This improved, however, over the next few days as they became more comfortable with us even just being in their surroundings. What sealed the deal in establishing our relationship with these kids was playing games with them before we began our work. This allowed them to loosen up and become much more comfortable with us as a group and as individuals. 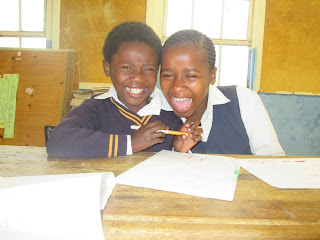 It was also clear from the start that the majority of the learners have not been exposed to much English so this barrier was, at times, very difficult to try and overcome. We had an easier time working with the grade 4 and 5 children right off the bat because we worked with choosing our favorite body parts. The physical act of pointing out these parts on our bodies made the language barrier much less and we always encouraged them to use their home language as much as the English words. 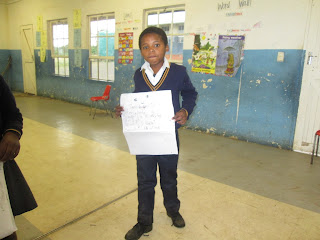 The learners’ skills on the computer improved a lot over the course of time that we worked with them and I was very proud of their final projects.

With grade 6 and 7, our final project was an essay entitled, This I Believe. We gave the learners the template to write this essay about what is important to them and they were meant to fill in the blanks. We started this project off by showing them pictures of subjects varying from violence and pollution to surfing and netball. We encouraged the learners to study these photos and write what they saw or how they felt about them. It required a bit of guidance and perseverance but they were eventually able to dig deeper and write really beautiful statements about these pictures. 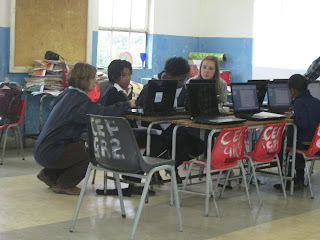 When it came to choosing what was important to them individually, however, it proved to be a bit more difficult. We gave them examples like family or sports and I sometimes got the feeling they just chose some of our suggestions because it was easier. I do not fault them for this at all though because I cannot imagine how hard it must be to think and write in a language you are not totally familiar with. I truly believe that if we had more time in this school and with these learners then they could have been able to dig deeper and really portray the meaning of this project on a personal and individualized level. 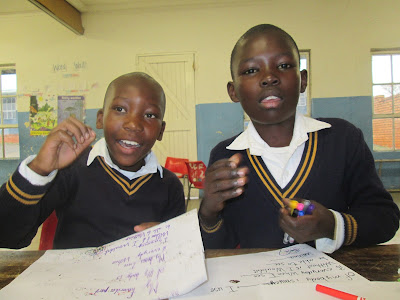 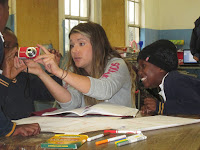 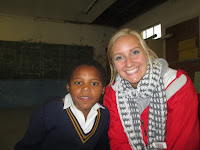 Working in this school and doing this project allowed me to grow immensely as a future educator. It taught me patience and perseverance. It taught me that there are great days working as a teacher and that there are also days that leave you frustrated with a sense of helplessness. Above all though, it taught me that determination and a desire to help is what needs to be the driving force behind teaching every child.

By Emily
Volunteer Teacher on the Wild Coast Schools Project
Teaching Student at Texas State University
Posted by Volunteer Africa Blog at 10:16 am