Running water is something we take for granted every day. Every time we flush the toilet, wash our hands, rinse a cup, need clean clothes or fill a pot of water to cook... it's there.

I have, during my time in South Africa, experienced a few occasions of having no running water; it's really scary. To turn a tap on and nothing come out and to not know when it will is a feeling that makes ones life feel quite out of control of your own life. To have to collect water from a tap down the road, a river or dam to wash your pots and plates, to not be able to wash your hands, body or clothes clean for a day or two - if you've ever experienced it you'll know the feeling.


In the majority of townships in the Eastern Cape of South Africa, this is a every day thing. A part of life. In Chintsa East village up the road there are a number of taps. Some plumbed into houses, some leaking badly, some cut off, some communal taps where families queue to fill up buckets and basins a few times a day.

In rural homesteads where families live in close quarters, where schools are over crowded and lack facilities, a lack of running water can exacerbate issues such as the spread of illness and bacteria which can lead to sickness.

VA32 recently placed volunteers in rural daycare centre Somila which hosts up to 35 children per day while parents and carers work. The school has no running water and, until recently, had no toilet facilities for the children. Upon installing long drop toilets it was recognised that there was no running water for the children to wash their hands.

Volunteer Jordan Luongo - a student at the University of North Carolina, majoring in Public Health and Health Education -  approached project leaders Kelly and Milton about the building of a "Tippy Tap".

A Tippy Tap was installed near to the entrance to the toilet. Tippy Taps are taps designed for rural areas where no running water is available. Not only are they easy to make out of mainly recycled materials, they promote hygiene and the use of soap and hand washing, they are foot operated to prevent the spread of germs and the used water can be re-used in gardens. 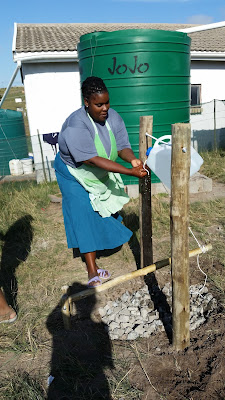 The tap is simple for both children and adults to use and promotes hand washing and basic hygiene in the school.

Read Jordan's personal experience of being the inspiration behind the first Tippy Tap in our partner rural schools, in her blog Jordan Luongo on Building a Tippy Tap in South Africa.

It would be great to see more Tippy Taps installed in rural Wild Coast Schools where running water is not accessible. A great project for this season :)

Find out more about VA32 volunteer programs on our website: www.volunteerafrica.co.za